Tumeric, Curcumin, as an Anti-inflammatory

Widely used in traditional medicine, Turmeric is a spice that gained popularity for both its flavorful properties and health benefits. With its spread across Asia, it has been used through ages, as a major ingredient in curries and across cultures as a vital food seasoning ingredient. It originates from the turmeric plant (Curcuma Longa) which is a flowering plant in the same family as Ginger. Its amazing collection of properties make it well utilized as a source of food-colouring, food seasoning and even food supplements. From teas to smoothies and even chocolate bars and hot meals, Turmeric has proven to be a relevant additive that provides a set of benefits. 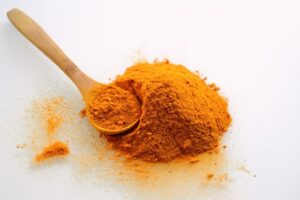 It is a perennial and herbaceous plant with a warm-bitter taste, a yellow hue and have been utilized even in Ayurvedic practices for its purported benefits. This rich history and use profile of the plant makes it a vital herb of interest as more and more researchers continue to investigate the reason why Turmeric may be advantageous to human health. Even in its earliest stages of use, in Asia it as a viable treatment for skin conditions, pains and digestive issues. Research would later show that all of these were accurate as the active ingredient “Curcumin” possessed both anti-oxidative and anti-inflammatory properties that helped with a wide range of health problems.

The function of Turmeric/Curcumin as an anti-inflammatory substance

Curcumin is the active ingredient in Turmeric that gives it both its flavour, taste and most of its healing properties. It represents about (5-6%) of the entire composite makeup of the spice. While Turmeric contains over a hundred different compounds, curcumin as the active compound is credited with most of the healing properties and is often the point of interests in many studies. It appears to have potent antioxidant and anti-inflammatory effects useful in a variety of conditions.

Curcumin’s well-stacked nutritional profile makes it a favourable treatment for metabolic symptoms, soreness, inflammation, anxiety and even arthritis. It is a polyphenol that works by targeting multiple signalling molecules while also functioning at a cellular level. By delivering therapeutic anti-inflammatory effects, it helps in relieving a wide range of symptoms. It is important to note, however, that while curcumin is responsible for the beneficial properties of the plants, it loses effectiveness when ingested alone as a result of its limited bioavailability.

This limited bio-availability, in turn, creates an atmosphere for rapid elimination, poor absorption, and rapid metabolism, three factors that hinder actual cellular absorption. Thankfully, bio-availability enhancers like Piperine (found in black pepper) can significantly help by increasing absorption up to 2000% and thus in turn, the effectiveness.

How does Turmeric help fight off inflammation?

Inflammation itself is a highly beneficial process of the body’s self-regulation without which bacterial and viral attacks on the body, could cause severe damage. However, not all cases of inflammation are the result of bacteria or viruses e.g. arthritis, autoimmune disorders, cancer. Chronic infection, over a prolonged period, is a cause for slow, sustained cell damage and is more challenging to treat.

Curcumin’s antioxidant and anti-inflammatory properties explain the two primary pathways that explain most of its effects, and reason for having a wide base of effectiveness. There is evidence that it increases body serum antioxidant activities such as super dismutase (SOD), with significant benefit to the oxidative stress factors in the body. Curcumin is also an excellent free radical scavenger, which further assists in reducing oxidative stress load within the body. Free radicals are unstable atoms that cause cell damage. Lower availability of free radicals is associated with lower levels of oxidative stress and inflammation in the body.

Chronic conditions like Alzheimer’s disease, Parkinson’s,  ME, Crohn’s disease, multiple sclerosis, cancer, cardiovascular disease, allergy, colitis, arthritis, diabetes, depression, fatigue and others, all involve a process of inflammation. It is a well-known fact that sites of inflammation release free radicals, further worsening the disease. Curcumin’s anti-inflammatory effect is by blocking the NF-kB molecule (a molecule responsible for inflammation with direct involvement in chronic diseases). This potent anti-inflammatory property puts it right on par with pharmaceutical drugs). In fact, a study involving 45 people showed that Turmeric outperformed Diclofenac as an anti-inflammatory agent for the treatment of rheumatoid arthritis.

While there aren’t a lot of studies that show more details on the function and therapeutic effects of Turmeric. However, early research has shown great promise, and its actual use is evidence of just how effective it is as an anti-inflammatory. One study shows that low doses of curcumin in healthy people can provide some health benefits. It is associated with improved memory function,  reduced cholesterol and reducing healthy biological inflammation. In combination with other supplements, its effects are enhanced even further.

When compared to pharmaceutical anti-inflammatory, curcumin has a significant advantage of having minimal side effects. It is most effective when combined with agents that can help to increase its bio-availability, and research suggests its benefit for inflammatory conditions, metabolic syndrome, arthritis, anxiety and high cholesterol.