Alopecia is a medical term used to describe loss of hair from some or all parts of the body. The psychological stress of hair loss is complex, as hair forms a large part of our identity and appearance and is at its highest at the onset stages. In women particularly hair represents femininity and attractiveness. In men it is associated with youth and vigour. For most people the loss of hair is distressing and they become highly self-conscious of their appearance. 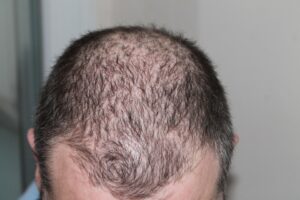 There are many different types of hair loss; the most common is male and female pattern baldness. In men this is usually seen as a receding hairline, followed by thinning of the hair on the top of the head and sides, whilst in women the hair thins mainly on the top. The cause in men is mainly attributed to genetic factors, but it is unclear if this is the cause in women.

Alopecia areata is another type of hair loss that affects the hair follicles causing hair to fall out, resulting in small round bald patches often on the scalp resulting in partial or total baldness affecting not just the head but also the face and body. In some cases the hair loss is permanent but in many cases it may re-grow after several months.  Alopecia can occur at any age but most cases first occur in teenagers and children particularly if there is a close relative with the same disease.  In 60% the first bald patch appears before the age of 20 yrs.  In the younger age group both males and females are equally affected but later affect mainly women.  Alopecia areata is an autoimmune disease where the body’s own immune system is faulty and mistakenly attacks a part of its own body; in this case it is the hair follicles.  It causes mild inflammation and weakening of the hair follicle leading to hair loss.

Telogen effluvium is another common type of hair loss which is characterized by widespread thinning of the hair, rather than bald patches. The loss of hair is usually because of a reaction to stress or medication.

There are multiple causes of alopecia. These include;

Studies on complementary medicine treatments have shown variable benefit although most have not been studied in clinical trials. Below is some information;

National Institute of Arthritis and Musculoskeletal and Skin Diseases. What is Alopecia Areata?. NIH. Website:http://www.niams.nih.gov/health_info/Alopecia_Areata/alopecia_areata_ff.asp#b (accessed 28/2/2014)