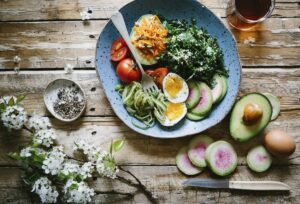 The Paleo (also known as the stone age or caveman diet) was first introduced by gastroenterologist Dr. W L Voegtlin. It is based on the principle that the human digestive system is not designed to handle the complex modern diet, which has been the result of developments in farming and processing methods. The hypothesis is that exposure to such foods has resulted in the development of modern diseases. Modern diets constitute high amounts of refined foods, trans fats, and sugars which are at the heart of the many chronic diseases like, cancer, obesity, diabetes, heart disease, etc.

The Paleo diet is primarily focused on the intake of lean, non-domesticated (grass-fed) meat, wild fish, and non-cereal plant-based foods. Domesticated animals are usually raised on grain-based feed and have relatively low amounts of saturated fats, while offering beneficial amounts of omega-3 fats. The addition of very high fiber (non-cereal) plant sources and healthy fats from nuts and seeds is also an important part of the diet.

What can you eat?

The idea is to replicate the caveman diet as much as you can. Opt for organic or wild game or fish. Domestication of cattle is identified with the end of the Paleolithic era with the beginnings of agriculture. The use of hormones and antibiotics in farming are also unwanted additives to our meat.

The Paleo diet has most often been presented as a celebrity-led weight loss method. In one small trial researchers found consistent improvements in circulatory, carbohydrate, and lipid metabolism thus improving BP, glucose tolerance, insulin secretion and sensitivity, and lipid profiles. Cutting out sugar reduces blood sugar spikes and energy crashes. Paleos believe that in adulthood only 40% of the population continues to produce lactase, an enzyme required to digest dairy.

The Paleo diet has anecdotally shown to be beneficial for some people with IBS, Crohn’s disease, colitis, and autoimmune disorders (multiple sclerosis, Hashimotos’ thyroiditis). However, there is very limited scientific research on this subject. It has been proposed that the Paleo diet helps to reduce gut permeability, also known as leaky gut (LG). In LG there is impairment of the gut wall and as a consequence certain unsuitable foods are absorbed into the body.  Grains, legumes, and wheat are believed to contain sticky, sugar-binding proteins that is damaging to our gut significantly contributing to LG. Lectins are carbohydrate-binding proteins that are highly specific for sugar molecules. Cereal grains and legumes contain lectins, and wheat contains WGA (wheat germ agglutinin) another form of lectin. Wheat also contains gliadin, the main problematic gluten protein, as well as opioid peptides and withdrawal symptoms can occur when wheat is removed from the diet. Collectively they all contribute to developing LG.

Criticisms of the Paleo diet

Criticisms of the diet describe it as a dangerous fad opposing the exclusion of dairy, grains, and legumes which are necessary for good health. They suggest that it can lead to serious deficiencies in essential vitamins and nutrients, but also a lack of dietary fiber required for healthy bowel movements.