One would have thought that anatomist would have discovered everything there was to discover in the human body. Au Contraire!  Hidden in plain sight researchers discovered the “Interstitium”; a mesh network of fluid filled spaces that lies along the web of collagen and elastin tissues throughout the body. It is estimated to be 20% of the total body volume. In the past it was simply labelled as dense connective tissue. Dr Neil Theise (co-senior study author) describes it as an “open, fluid-filled highway”. This was an accidental finding during studies on the bile duct. These spaces were never identified because the fluid filled spaces are only visible in living tissue, in dead tissue the fluid is lost and the compartments collapse and flatten losing their structure. Researchers used probing techniques on living tissue to see them in their full form. The spaces appear to be pre-lymphatic and appear to drain into lymph nodes.

In the human body around 70% of the water is found in cells. This finding helps to answer questions about where the remaining extracelluar fluid resides. Various theories for the function of the Interstitium have been put forward including being a source of lymphatic fluid. Consequently, it has a role in the body’s immune system and could be involved is the process of spread of cancer cells. 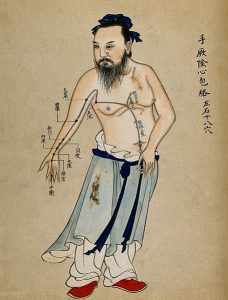 Researchers have speculated that in Acupuncture the tip of the needle goes into these spaces and may explain how it works. Traditional Chinese Medicine (TCM) practitioners (including acupuncturists) learn about how the healthy and balanced movement of qi is vital to maintaining health and that blockages or stagnation results in health problems. Results from this study support this understanding. Past articles have discussed the existence of interstitial fluid network along fascia lines. These fluid-filled matrix correspond very closely to the acupuncture meridian channels where Qi (vital energy) flows. We can therefore postulate that the flow of interstitial fluid is crucial and any impediment would compromise the interstitium’s ability to fully function.

The use of cupping in acupuncture, where the skin is sucked up has the effect of raising tissue and loosening these spaces therefore allowing the flow of interstitial fluid. The Interstitium spaces are supported and organised by collagen lattice and thus described as a dynamic compression and distension shock absorber to protect tissue during daily functions. Data on keloid scars shows that they appear on skin under high tension, and so the effects of forceful mechanical forces of these spaces and the fluid flow within can be considerable. Similarly massage and acupressure techniques include compression and lifting actions that would act on these spaces and therefore the interstitial flow. Further, the process of wet cupping where through a small incision blood is sucked into cups is understood to remove toxins or ‘stagnant blood’ can be directly linked to clearing these interstitium spaces and encourage the flow.

Future studies on the Interstitium could give much more detailed answers on how acupuncture works and finally confirm ancient TCM theories around 5,000 yrs old.