Acupuncture Science 1: How does it work?

In this new 8 part series we attempt to understand the science of acupuncture and how it links to western medicine. Each week we will be exploring the philosophies and concepts on which acupuncture is based, which expands into how they could be linked into the physiology of medicine.

Part 1:  How Does Acupuncture Work  ?

“How does acupuncture work ?” is a question often asked of an acupuncturist. The acupuncturist will usually start to explain the concepts of ancient Traditional Chinese medicine (TCM) philosophies talking about blocked energies, meridians and qi. For some it will make absolutely no sense, while others will be fascinated and just accept the explanation. Science and logic tells us that inserting a few needles into (invisible) energy channels cannot possibly do the things that acupuncture claims to do. However, given the convincing evidence available on the benefits of acupuncture there is no doubt the acupuncture has a place in healthcare. TCM philosophies are unique in their perspective and do not share any similarities with modern physiological and pathological teachings.

In this series of articles we attempt to try and understand TCM and the physiology of acupuncture in order to offer some scientific grounding, but also to understand the diverse biological and clinical effects of acupuncture.

Around 200years B.C the basic tenets of TCM were recorded in the Yellow Emperor’s (Huang Di Nei Jing) textbook of physical medicine. Like most things in China, ancient Chinese doctors had traditional theories based on a philosophical view of nature.  Nature was viewed to be in a state of constant change and continuous development. Within this, man plays an integral part of and is constantly interacting with his natural environment.  Collectively, this was representative of the natural law, which is referred to as Tao. Tao is a force of nature that is responsible for dynamic creation and transformation.  Subsequently, from this draws out the polar, opposing forces of Yin and Yang. 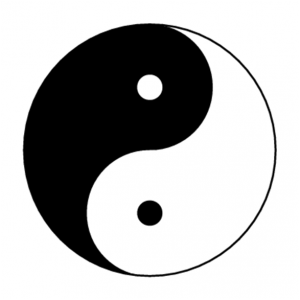 Chinese physiological and pathological concepts are based on precise empirical observations linked to a system of theories, one of which is the Yin and Yang.

Within a dynamic process the two opposites complement each other and therefore Yin and Yang are in a state of contented co-existence. Thus, one cannot exist without each other e.g. if there was no light, darkness would not exist; similarly if there was no cold, heat would not exist. This dynamic system of complementing and opposing Yin and Yang combines to make up a whole.  Chinese medicine uses this system to understand medicine and describe life processes and diseases.

In essence Yin and Yang is all life and encompasses everything in the Universe. Similar to Einstein’s equation of E=mc2 it symbolises the fundamentals of life and being.  However, in comparison to western science the philosophy does not have a linear approach and there are no absolutes, with complementarities and harmony been at its core. Often Yin and Yang is referred to in the context of Qi (pronounced Chi), a universal life force that we have within our body which flows and protects us. There are many different types of Qi , with varying functions and any imbalance in its flow results in poor health and disease. TCM and Acupuncture practices aims to re-establish and balance the flow of Qi in our body to restore good health.

In Part 2 of this series we talk about ‘Qi: Vital Energy, Life Force‘.