Moxibustion is an ancient traditional Chinese treatment (TCM) that involves the burning of Mugwort near the surface of the skin. Mugwort is a common name for several species of aromatic plants belonging to the genus Artemisia. Other names include wormwood and green ginger. Moxibustion is frequently used in conjunction with acupuncture treatments. The main aim is to boost the flow of qi (vital energy) through the meridians (body’s energy pathways), whilst eliminating any unwanted pathological qi concentrations along the meridians. Mugwort is commonly referred to as Moxa and made from the dried-up plant materials. Typically, this process involves shaping the Moxa into a cylindrical cigar-shaped stick or small cones. They can be used directly and indirectly on the skin. Direct moxibustion involves a small amount of Moxa being placed directly on the skin, but it can cause scarring and therefore is less popular. Indirect Moxa involves fixing and burning the Moxa on the top end of the acupuncture needle, or hovering a moxa stick over the skin. This burning edge is then held within approx. 2-inch distance and made to smoulder gently diffusing the heat into the tissue. Other techniques may be burning it on a layer of sliced ginger, garlic or salt on the patient’s skin.

Acupuncturists target specific acupuncture points or meridian pathways corresponding to the condition being treated. Patients often report a flood of warmth at the treatment site which can radiate and along the meridian pathways. 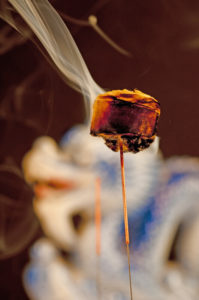 In line with traditional Chinese medicine, Moxibustion functions by delivering a therapeutic effect using a mix of thermal and chemical stimulation. This is reported to lead to a tonification and purgation effect. Experiments have shown that the thermal effects of Moxibustion have proven to be very effective in stimulating not just the superficial, but also the deeper tissues of the skin. Investigations have shown that the burning moxa radiation lies within the infrared portion of the heat spectrum.

Ingredients identified from mugwort leaves and moxa smoke have a variety of biological properties, thus are at the root of Moxibustion effects. It is this dual effect that works along the meridians thereby regulating qi, and helping with disease treatment and prevention. Unlike acupuncture that generally facilitates the elimination of pathogenic qi, moxibustion helps to introduce heat, warming up the meridians and consolidates the body’s qi. Some preclinical studies suggest that moxibustion boosts the immune system and enhances the physiological functions of the body.

In TCM, mental and physical health problems are believed to develop as a result of unexpected blockages in the qi flow pathways. The thermal effect of moxibustion generated along the meridians helps to release these pathways while increasing the flow of vital energy. While arguments could be made either in favour or against its efficacy, preliminary evidence from several studies has shown that moxibustion does indeed provide relief when used in the treatment of a wide range of health issues.

In a 2009 study involving 51 postmenopausal women, the results indicated that 14 sessions of moxibustion were effective in keeping hot flashes at bay. While the actual mechanism and treatment pathway is well-studied, the specific cases where moxibustion can work are still much under speculation. However, this does not mean that moxibustion is ineffective. In fact, as a result of the attention generated from personal reports of people who have experienced acclaimed benefits, there are several studies currently being conducted to investigate the possible efficacy of Moxibustion for a variety of health issues.

Common health problems that can benefit from moxibustion includes;

Needless to say, there is a wide range of reported benefits of moxibustion and while studies are still being conducted on the exact range of effectiveness, moxibustion remains a safe treatment and can deliver therapeutic effects that can help heal the body.