The latest  US death linked to vaping has been reported. This makes it the ninth person to die from an outbreak of a mysterious lung diseases, with the Centre of Disease Control confirming over 530 people now affected. First reported in April this year, symptoms include fatigue, coughing, breathlessness, vomiting or diarrhoea. The first case has now been reported in Canada.  The White House has announced plans to ban flavoured e-cigarettes.  Over 20 countries, mainly in South America, the Middle East and South-East Asia, have already banned the sale of vaping products, India and Korea being the latest to join them. With such uncertainty on e-cigarette (EC) legislation and amidst calls to ban, the US supermarket giant  Walmart has ceased all sales entirely. 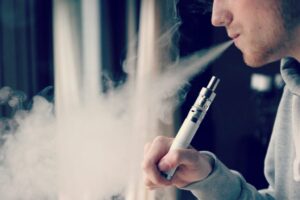 In 2014 and 2018 I wrote about the potential dangers and long term harm of EC, which at the time was extremely high on the media agenda when UK sales had sored 340% in a single year (2012). Its was promoted as the safe alternative to tobacco smoking. Significant rise in the number of never-smoking youths taking up EC has been noticeable. Advertisements of nicotine-free liquids with fruity and sweet flavours offer a sizeable incentive and social approval to young people to start using EC. The Forum of International Respiratory Societies has deemed EC smoking to be a significant public health issue as it encourages smoking behaviour.

No firm evidence has been established on the exact causal constituent but the finger is still on the many ‘flavours’ and ‘carrier substances’ that cause physiological effects. Effects include changes to our immune system and alter the healthy biology of the lung tissue. The inhaled gaseous mixture is deposited in our lungs and undergo changes. A chemical propylene glycol causes upper airway irritation. EC smoking releases volatile organic compounds and (ultra) fine particles into the atmosphere giving rise to potentially toxic passive vaping for others.

After the experiences of tobacco smoking, we have still now learnt that inhaling anything other than clean air is not good for our health.  In the UK there is still a belief that vaping is a safer alternative to tobacco smoking, however, this may be changing.  A small study conducted with GPs and nurses found that practitioners were uncertain of the safety and longer-term risks of EC. Some were unsure about their ability to advise on its use.

Acupuncture is widely used for addictions. In particular smoking and drug addiction. It offers a safer alternative when compared to the suspect risks of EC smoking, and a useful adjunct to prescription opiates for difficult cases of drug addictions. Auricular acupuncture or acudetox techniques involves inserting small needles into the patient’s ear. These can be used in conjunction with body points. Treatments help to ease withdrawal symptoms, reductions in cravings, anxiety, sleep disturbances and the need for pharmaceutical medicines.