E-cigarettes can cause long term harm

Once again the media have focused on the use of E-cigarettes. For good reason there are still doubts on its safety. Majority of safety research has been on the e-cigarette liquid prior to it being vaped based on its constituents having fewer carcinogenic toxins. In a recent study scientists at the University of Birmingham believe that e-cigarettes commonly known as vaping is much more harmful than previously thought. Although safer in relation to causing cancer, 20-30yrs of vaping is associated with a higher risk of long term lung disease such as, chronic obstructive pulmonary disease (COPD) after 20-30yrs of vaping. Scientists mimicked the vaping mechanism, once the vapours are inhaled it turns back into a liquid condensate within the lungs. They tested this new condensate on samples of lung tissue and found significantly harmful effects.  It inhibits the alveolar macrophages from working effectively thus affecting the lungs ability to get rid of dust, bacteria and other allergens. Alveolar macrophages are a vital part of the lungs immune system. 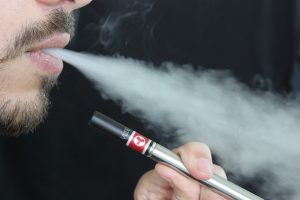 When first introduced e-cigarettes had my own alarm bells ringing. The World Health Organisation has expressed concerns over e-cigarette safety. In the UK sales soared by 340% in one year, with the industry worth rising from an estimated £44 million (2012) to £193 million (2013). In 2017 sales increased by 50% to reach £1bn and set to exceed £2bn by 2020.

Vaping is advertised as a safer alternative to tobacco smoking, but is it really?  ‘Vaping’ is the inhalation of a mixture of carrier substances; propylene glycol (an alcohol) and glycerine (produced from fats and oils), added with nicotine and flavourings through an electronic vapouriser. Scientists are still divided on its safety. One camp believes that vaping is a safer alternative to tobacco smoking, while others are sceptical of its longer-term use. The finger has been firmly pointed at the many ‘flavours’ and ‘carrier substances’ that cause physiological effects. Vaping also releases volatile organic compounds and (ultra) fine particles into the atmosphere therefore for the rest of us increasing the risk of passive vaping. A study at New York University (Jan 2018) suggested that vaping may raise the risk of cancer and heart disease. Researchers observed changes in DNA which were similar to those found in secondhand smoke. In another stuty  the toxic element chromium and four times more nickle was found when compared to traditional tobacco. A BBC investigation found that a VIP butterscotch flavour refill contained a chemical diacetyl which, although safe to eat is not safe for inhalation and has been linked to a serious lung condition called ‘Popcorn worker’s lung’.

It took a long time for us to realise the health risks of smoking tobacco. Doctors used to recommend smoking to aid the nerves. How long will it take for us to realise that e-cigarettes are not safe? The rise in popularity amongst young smokers is worrying as they are drawn towards its image as a ‘safer’ alternative to smoking, consequently making it a potentially major public health issue. It is hard to accept that regularly spraying your lungs with layers of vegetable fat and other chemicals was OK! There is talk of e-cigarettes undergoing stricter regulation, and for its sale to be made illegal to the under 18s, while the WHO advised on banning its use indoors. Personally, I feel both of these cannot come soon enough as we need to establish a few facts before it is too late and lives are lost.